Cold rhubarb soup is great as a dessert with whipped cream. It is also a great side with milk porridges.

Rhubarb soup is made in all Scandinavia and northern countries. This type of dessert soup is called Kiisseli in Finnish. -Raparperikiisseli. Swedes call this rabarbersoppa and Norwegians to Rabarbrasuppe.

Different sweet cold soups made from berries and fruits are traditional desserts served with whipped cream. Rhubarb soup can also be served as a snack. Especially kids love berry soups.

This rhubarb soup is sweet but also tart. This is why it is served with something creamy. Whipped cream, vanilla sauce, ice cream, or milk make the rhubarb's sourness melt away.

Rhubarb grows in the northern parts of the globe, where the ground freezes in wintertime. This plant is popular in gardens in the Scandinavia but also in the US. It originates though from Asia.

How to make a low carb version

Rhubarb does not have many carbs in itself. To make a low carb low-calorie version of this soup replace the sugar with ¼ cup of erythritol sweetener. To make the soup thick use psyllium instead of starch. 1-2 teaspoons of psyllium husk is enough. Psyllium is a type of fiber. One portion has only 2 grams of carbohydrates.

Other things you can flavor your rhubarb soup with

You can add some additional spices or make variations to your rhubarb soup.

Strawberries and apples are known to pair well with rhubarb. They also add some sweetness to the soup. Strawberry-rhubarb soup is also a popular dessert. If you want to make, it just replace half of the rhubarb with fresh or frozen strawberries.

You can use the same recipe to make other berry soups also.

Why do you serve milk with rhubarb?

Milk contains calcium, and rhubarb needs to be eaten with something calsium rich because it contains oxalic acid.

Do you have to peel rhubarb before you use it?

Young stalks do not need to be peeled, just wash them. You can peel away the outer layer from old, big, thick woody stalks.

Can you make rhubarb soup from frozen rhubarb?

Yes, the soup is delicious even from frozen rhubarb pieces.

How long does rhubarb store?

Store your fresh stalks in the fridge for up to a week. Small stalks quickly start to evaporate and become soft. Rhubarb stores as frozen for one year in an airtight container. 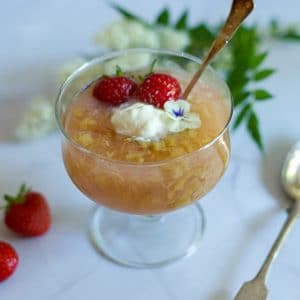 For the starch slurry

Calories: 80kcal
Tried this recipe?Let us know how it was!
« Rhubarb mead
Swedish pizza salad »