A milk-based porridge cooked with short grain starchy rice and served with cinnamon or a mixed fruit soup. Finnish rice porridge is similar to the Swedish rice porridge and other Scandinavian rice porridges. We do not bake leftovers into a pudding, but instead, use them in Karelian pies.

It is as common to make rice porridge in the oven and on the stovetop. Rice porridge is a traditional Christmas dish, but it is eaten whole year round as breakfast. This is even a common lunch at schools, served with some fruit soup.

We do not have a custom of baking the porridge leftovers as pudding. Although rice porridge baked in the oven has a very pudding consistency. We, however, use leftovers for oven pancake, and on the Åland island, they sometimes make a pancake where the main ingredient is rice porridge or semolina.

Most people eat rice porridge on Christmas eve as a late breakfast. One common tradition is to hide an almond in the porridge. Whoever finds it is to have a successful next year. This tradition spread from Sweden to Finland. Some believed the good fortune was to be wed or have a child. In some families whoever got the almond had to make a poem to the guests.

Porridge has always been a staple food in Finland. When boiled in milk it became a more festive food. Making Christmas porridge from rice became common only in 1900 and only the more wealthy ones could afford rice.

Full fat milk is traditionally used since fat-free milk makes a more gray-looking porridge in color, it also burns more easily and does not taste as creamy. I think milk with fat content from 1,5% and up is ok to use. Full-fat milk in Finland has 3,5% fat, it is sold in red cartons and is called täysmaito. You can even mix fat-free milk and heavy cream.

The porridge has a looser consistency when hot, but it thickens quite much when it cools a bit.

Milk porridge burns easily so remember to stir it once in a while! A nonstick pan can be very handy.

My favorite if I am cooking a very large amount and need to keep it warm is to make it in *an 8-quart double boiler set. This is what I used when working at a nursing home and making porridge in the morning that had to be kept on the stovetop for hours. It is perfect since it does not burn if you have water in the lower pan.

Store leftovers in the fridge. In Finland when it is cold, we can keep the porridge outside. It stores for around 3-4 days. Reheat your porridge in a pan, but add milk to it when reheating so you get the right consistency to it.

Traditionally rice porridge is served with cinnamon and sugar and maybe a splash of milk on the side to cool down the steaming hot porridge. Another common side is to serve it with a sweet plum sauce. The plum soup is boiled from dried plums, water, and sugar and thickened with some starch.

The third option is a so-called sekametelisoppa. Translated as "mixed noice soup", but it is a mixed dry fruit soup. Boiled in the same method as plum soup but from different dried fruits. They are usually sold as a ready mix in the store. The soup consists of plums, apples, pears, and apricots. Some mixes have also dates, raisins, and peaches. Dried to be a bit soft, not totally dry and hard.

You can find it in the store as the name kuivattu sekahedelmä and the fruits can be eaten as a snack also. The soup is a type of kiisseli. It can be eaten on its own as well with some whipped cream.

This fruits soup is a very Finnish thing. It was luxurious to eat rice porridge with fruits, when the times were poor in the history.

Boil water, fruits, cinnamon, and sugar together in a pan for 10 minutes on medium heat.

Mix the starch into a small amount of cold water, and add it while mixing at the same time. Let it bubble up, and lift to cool down.

The fruits are usually left as big chunks in the soup, but some like to use a hand mixer and puree it into a smooth consistency.

Serve it with rice porridge or on its own when cooled down with whipped cream.

One variation is to boil it in an alcohol-free mulled wine, Finnish glögi.

What country eats porridge on Christmas?

Rice porridge is eaten during Christmas in Finland, Sweden, Norway, Denmark, the Faroe Islands, and Iceland. When it is eaten varies; some eat it as lunch on Christmas eve and some as breakfast, lunch, or dessert on Christmas day. Leftovers are baked into pancakes or pudding and eaten as a dessert.

What if you burned your rice porridge?

Do not stir the burnt bottom so it mixed with that whole amount. Save what you can. Add water to the pan and scratch the burnt part gently away. You can bring your pan to a boil with a mix of washing powder and water, let it cool, and scratch a stainless steel pan with a scouring pad.

What spatula is best for porridge?

A wooden spatula is perfect for rice porridge. Leave it on top of your pan lying across and it will prevent the milk from boiling over. 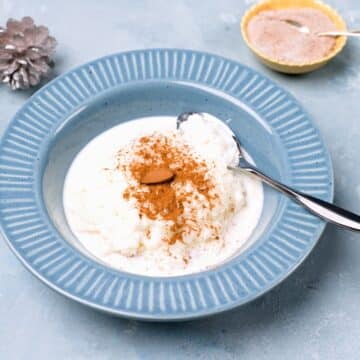 If you use a double boiler pan set with water in the bottom pan it might take a longer time to cook your porridge.  Plant-based milk is an option for a milk-free, vegan porridge. Replace butter with margarine or leave it out.  Store leftovers in fridge and reheat in pan adding some milk to it since it thickens a lot when cooled down.