Rice porridge is very popular in Denmark, Norway, and Finland, with similar traditions.

Risgrynsgröt-rice porridge is not the same as rice pudding. Pudding is usually made from leftover rice porridge and some eggs or gelatin is added to get a more pudding consistency. Porridge does not have eggs, it is boiled from milk and rice. Check the recipe for rice pudding.

Pudding is usually eaten as a dessert, it has a firmer texture. Rice pudding is traditionally made in the oven. Leftover rice porridge is mixed with eggs and heavy cream, then baked until it has a firm consistency and is browned on top.

You can add some sugar, cardamom, and even nuts to the pudding. It serves well with apple sauce, whipped cream, jam, or berries. 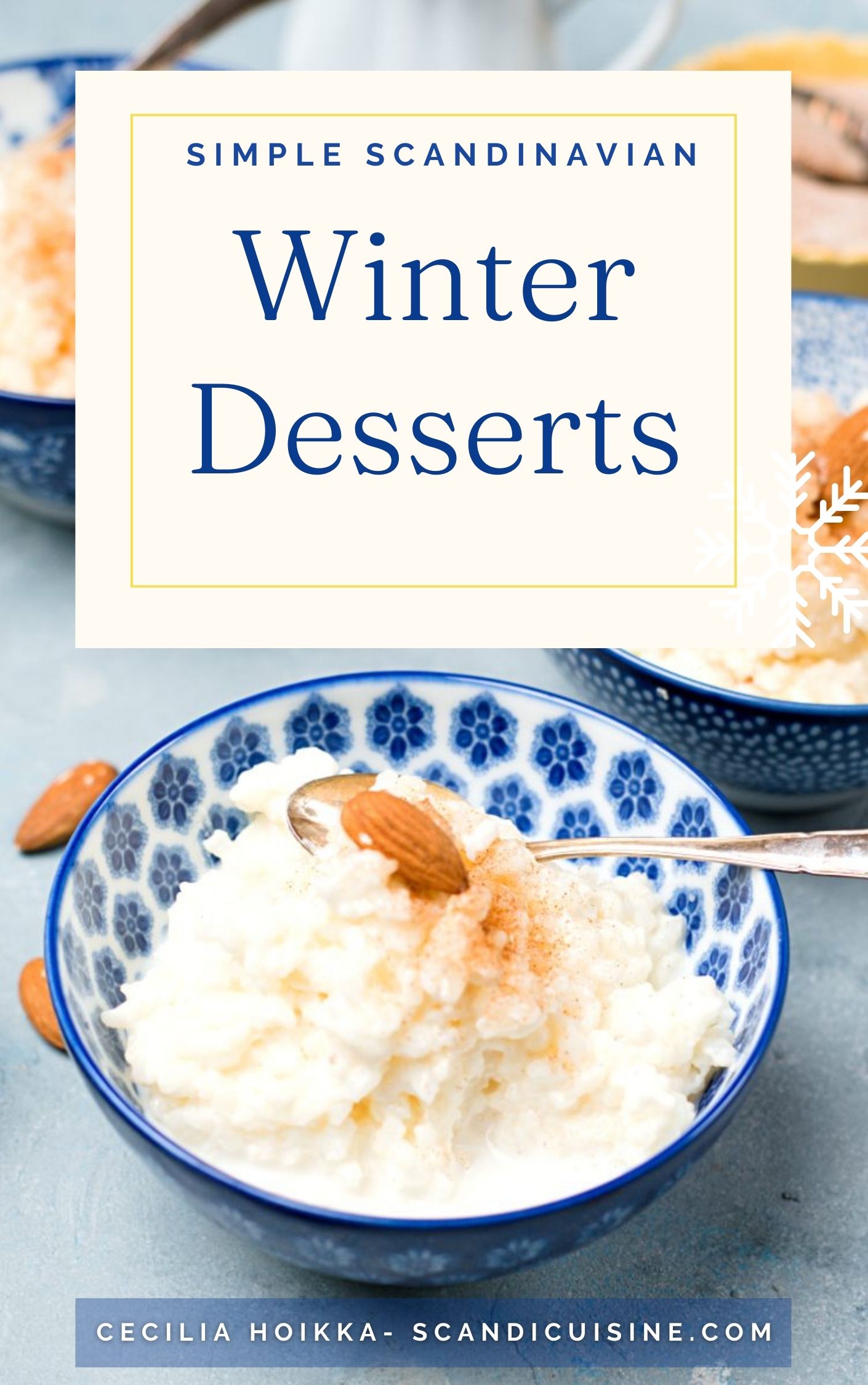 The Swedish tradition of the almond

A common Christmas tradition is to hide an almond in the porridge pot. Whoever finds it is to have a successful next year. In some families the meaning is different; One who finds it is to be married as next, or if he/she is married they would get a child.

One custom around the almond is that the person who finds it gets a small gift; "mandelgåva". This custom is common in Southern Sweden, Denmark, Norway, and even in the Swedish part of Finland. This was done at school when I was a child; the gift could be some small treat like gingerbread cookies, chocolate, or a small figurine.

The tradition of the almond comes from ancient Greece; there a bean was hidden in food and whoever found it became the queen or king of the evening. He was to come up with different games that others had to do.

Rice was not always the main ingredient in this type of porridge. Rice has been exported to Sweden from as early as 1500, but for the common people, it was too expensive. Instead of rice, this type of milk porridge was boiled from barley. Also, oats were common.

Rice porridge was a festive food when money was short, especially during war times. After this, it has evolved to be a cheap food with the abundance of food nowadays. Rice porridge is not only eaten during Christmas, but it is a common breakfast or evening meal, especially a kids' favorite.

Type of rice to use

To make authentic rice porridge with the right consistency, you need to use porridge rice. It is the one you see in the middle of the picture. In Scandinavia, it is sold in packages as you see in the above image. Porridge rice is a type of pearl rice, short grain, similar to sushi rice.

To make rice porridge you need a type of rice that is sticky. Pearl rice is best. Sushi rice is ok to use. If you don't have either of these, you can use risotto rice like arborio or carnaoli. They though absorb a very different amount of liquid, so you might need to adjust the water/milk ratio. The risotto rice you can see on the left of the picture is a bit bigger in size than regular porridge rice, so the consistency of the porridge comes out a bit different.

One type of rice unsuitable for making porridge is long grain rice. Basmati rice, as you see on the right, does not make sticky rice. Other types of long-grain rice are not good either. Although it is long grain, Jasmine rice can be used in porridge since it makes some stickiness when boiled. Jasmine rice tastes though very different and creates a varying sweetness to the porridge.

You can serve the porridge steaming hot with some milk and sugar-cinnamon mix. The porridge is tasty even as cold, but it sets and becomes much more firm in consistency when cooled.

If you want to reheat the rice porridge you need to add some milk or water to get a nice smooth texture again. It is best reheated on the stovetop while stirring at the same time.

Milk porridges tend to burn quickly. The temperature should not be too hot but not too low either, or it won't boil. The full-fat milk and butter help it not to burn as quickly. It is good to use a pot with a sturdy, thick bottom. Also, nonstick pans are great.

If you want to avoid this problem and do not have the time to stir your porridge and keep an eye on it, then you need a double boiler pot. You have boiling water in the bottom layer and cook the porridge on the top layer. Here is an example of what I mean in the Amazon store: *8-quart double boiler.

Milk porridge tends to boil over if you do not watch it. Especially if you have a too hot temperature. You can leave a wooden spoon on top to avoid this. Also, use a big enough pot.

What do you eat with rice porridge?

These are some traditional additions to a Scandinavian type of rice porridge. Some like it even with brown or golden syrup. Fresh fruit or berries also go very well together with rice porridge.

You can also sprinkle some homemade gingerbread spice mix on top of your porridge instead of plain cinnamon.

If you want to add an almond, a peeled one is traditionally used, since the color is white and can not be seen so clearly in the porridge.

If you made a double amount you can store your porridge in the fridge for up to 4 days.

What to do with leftovers?

As I mentioned before, the most common way to use leftover rice porridge is to make rice pudding. One other typical dessert is orange rice. Leftover cold rice porridge is mixed with whipped cream, orange bits, and sugar.

Rice porridge is even delicious in a pancake. In Sweden, Gotland people make a rice pancake flavored with saffron. It is a type of rice pudding called Gotlandspannkaka. In Finland, the Åland Island, they make ålandpannkaka, which is flavored with cardamom and eaten with a thick plum soup and whipped cream.

What is the difference between rice porridge and congee?

Congee is a classic Chinese rice porridge. It is often eaten as a savory meal with added dried seafood and spices. Scandinavian rice porridge is always eaten as a sweet meal, as breakfast or lunch, with sugar, cinnamon, or berry/fruit sauce.

When is Swedish rice porridge eaten?

In some families, this is a traditional Christmas eve lunch; in some, it is eaten as Christmas morning breakfast. Rice porridge is also a typical food eaten year-round as lunch or breakfast. 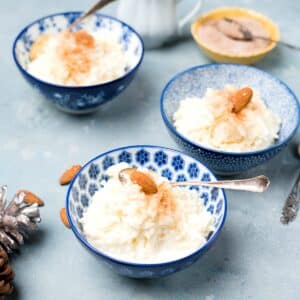 Tip: A double boiler pan is handy for milk porridges so they won't burn.  Serve the porridge with cinnamon, sugar, a spoon of butter, and milk on the side, or with berry soup.  To make vegan porridge make it with plant-based milk like soy milk. Use margarine instead of butter.