This is a light, fluffy and easy mousse dessert made with mämmi.

This dessert is perfect for those who have not tasted mämmi before since the rye is more subtle, and you have flavors of vanilla in this dessert.

Read also my post about common foods on the Finnish Easter table.

Mämmi is a traditional Finnish dessert eaten usually around Easter. It is actually a rye porridge made from rye flour and malted rye that sweetens naturally in the making process; this is called imellytys. In history, mämmi was made in small birch bark boxes.

Typically mämmi is eaten cold with some heavy cream or full-fat milk. Nowadays, the trend is to include mämmi in different desserts during Easter.

Not all vanilla custards can be whipped to a foam. If you have a hard time finding whippable vanilla sauce, you can use whipped heavy cream. With the heavy cream, add 1 teaspoon vanilla extract or ½ cup of vanilla custard powder with the cream.

Finnish stores have various vanilla sauces since we love to eat them with all pies and desserts; this might be hard to find in the USA. One brand you can try out for this recipe is Oatly. They have an oat-based milk-free whippable vanilla custard. 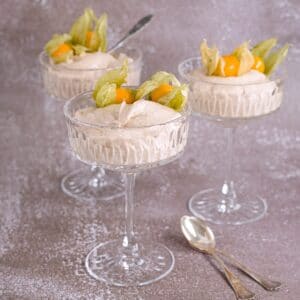 Vanilla sauce can be replaced with heavy cream and some vanilla extract. For a milk-free version, you can use Oatly oat-based whippable vanilla custard.

Calories: 150kcal
Tried this recipe?Let us know how it was!
« Finnish Rye flatbread
Finnish Easter Foods »